Grilling Out With Gout! 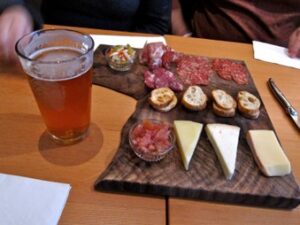 Summer is upon us and grilling season is in full effect.  Many of you will just start to salivate when I mention the words “grill out”.  There is just something about being around friends, enjoying grilled meat, and having a cold beer that brings joy and fun into our busy schedules.  Unfortunately, there is a certain subset of the population that can have their feet adversely affected by what I just described.  Did you ever notice that for some reason, your foot, or specifically, your toe joint(s) seems to become painful and will swell, often times with redness and heat without ever recalling suffering an injury to the foot?  This may be a sign of GOUT….

What is gout?   Gout is a hereditary disorder (yes, mom or dad’s side of the family likely had it too) that is characterized with spontaneous joint inflammation and severe pain due to an increase in uric acid in your blood.

There are various types of protein in the food we eat.  Uric acid is a byproduct of a specific protein called PURINE.  There are foods are higher in purine proteins than others.  When you eat foods high in purine proteins, certain individuals (in particular, those individuals susceptible to gout) are unable to excrete the elevated levels of uric acid fast enough, or they overproduce the amount of uric acid in their body;  Either way, the end result is a relative increase in the by-product of the protein, called uric acid.

Uric acid is usually in a liquid, dissolved state in the blood at your core temperature (your heart / chest area).  When the blood runs to your foot, the blood is carried away from your heart and body core, where the temperature is the highest, and will cool on its way down to your foot.   The uric acid starts to crystalize (kind of like cooling a cup of warm water in the freezer, to the point where you start to see ice crystals).  It is those crystals in the blood (uric acid crystals) that accumulate, and they will deposit in the joints and tissues of your foot.  They will clump up in your joint(s), and incite a severe inflammatory response that is very painful, so much that often times even a sheet touching the foot is unbearable.

Gout, if left untreated, can be debilitating and extremely painful.  Ultimately, it can erode the surface of your joints, leaving the patient with what is called “gouty arthritis”.  This is similar to good old fashion degenerative arthritis; but unlike the “wear-and-tear” arthritis that we are all too familiar with, Gout arthritis is based on the increased levels of uric acid in your blood.

Often your physician will order a uric acid level to determine if you have the condition; HOWEVER, this test is not 100% positive.  I have diagnosed many patients with gout with normal uric acid levels.  How is this you ask?   This is because uric acid levels can fluctuate from normal to abnormal.  Often times your uric acid level will peak right before a gout flare (aka Gout attack) sets into the joint.  By the time you go see the doctor and he or she orders a lab test to check for gout because of a severely painful foot, the uric acid level may have dropped back down into the normal range. Don’t be fooled by a “normal uric acid level”.  You could still have gout despite a normal blood test.

Gout is often difficult to differentiate from a skin infection, and sometimes when a patient presents to the office with a red, hot, swollen joint, doctors elect to place a patient on both an antibiotic and an anti-inflammatory to cover both possibilities.  Unfortunately, Gout will NOT get better with antibiotics.  Signs of gout can sometimes show up on an x-ray.  Typically, if there is a family history of gout, and there is no history of trauma or injury to the foot, then there is a good chance that the patient is suffering from gout; HOWEVER, this is a clinical diagnosis that needs to be made by your doctor, and he or she will need to see your foot.

Typically, x-rays are taken of the foot, and lab work is ordered to check for uric acid as well as infection.  Although rare, I have seen cases of both and infection and gout on the same foot.

There are foods that you will want to avoid if you suffer from gout.  These are food that are high in purine amino acids.  Below is a partial list of some of the more common foods that have been known to incite a gout flare up.  The following are not absolutes, nor is it meant to be complete list as other foods high in purines may not be listed.  That being said, the list of foods below will have purine levels that vary significantly.  The list is ordered in a relative “high to low” manner with respect to purine content.

Once a Gout diagnosis is made, there are certain medications can be implemented to help excrete the uric acid from the blood. Others will assist with the symptoms to help reduce inflammation.  Schedule an appointment with your doctor to discuss these options.  Ultimately, cortisone injections may be necessary in severe cases where the pain is just not responding to oral medications.   There are also some new intravenous infusion therapies options now available that have shown incredible results!

I hope that none of you have to go through a gouty attack; they can be very miserable.  However, if you think you might be developing one, please give us a call for an appointment.  These are conditions that are quite debilitating, and generally need to be seen as soon as possible; we will certainly do our best to get you in to see us, often the same day if possible.